Tristan Driessens (°1982) is a Belgian born oud player and artistic director. He is regarded as one of the finest performers of the oud in Belgium nowadays, creating a style entirely of his own. He hold a master degree in Musicology (Université Libre de Bruxelles) and a master degree in lute (LUCA, Lemmens). From 2009 to 2012, he journeyed in Istanbul where he studied makam under grand master Necati Çelik, who had a great impact on his career. Additionally, he attended master classes with Kudsi Erguner (Bîrûn Ensemble, Venice), Yurdal Tokcan (Labyrinth Musical Workshop, Greece) and Naseer Shamma (Beit al-aoud, Cairo).

He is the artistic director of the much celebrated Lâmekân Ensemble, which he founded in 2011. The group released three critically acclaimed albums so far and enjoyed sharing the stage with the greatest representatives of Classical Turkish music, most notably Derya Türkan, Kudsi Erguner, Necati Celik, Murat Aydemir, Bora Uymaz and Burcu Karadag.

In 2015, in order to shape his eclectic musical references in a set of newly wriiten compositions, he created the Tristan Driessens Soolmaan Quartet.

In 2016, Tristan founded the Seyir Academy, a Brussels based music Insitute for Turkish and Mediterranean studies that organises seminars, master classes, concerts and weekly ‘ûd lessons. In the same year, Belgian world music association Muziekpublique asked him to be the artistic director of the Refugees for Refugees world music group.

As a musicologist, he concentrates his research mainly on makam, which is the classical music system of the Middle-East. He is currently preparing a book that will provide an analysis of makam through transcriptions of modal improvisations (taksîm) performed on the oud. 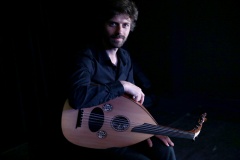