The renowned vocal competition Operalia awarded Elsa Dreisig First Prize as best female singer of 2016. The same year she was named Vocal Discovery of the prestigious Victoires de la Musique Classique and the highly esteemed magazine Opernwelt granted her the sought-after mention as Young Artist of the Year. In 2017 she was awarded Young Opera Artist of the Year in Denmark’s Copenhagen Opera Festival. As early as 2015, Elsa Dreisig had been awarded both Second Prize of the Queen Sonja Competition in Oslo as well as First Prize and Audience Prize of the New Voices Competition of the Bertelsmann Foundation in Gütersloh.

From 2015 through 2017 she was a member of the opera studio of the Berlin State Opera where she has since performed leading roles such as Pamina (Die Zauberflöte) and Euridice (Orfeo ed Euridice). Further engagements within the same period included no less than her debut with the Opéra national de Paris (Pamina), the Zurich Opera (Musetta in La Boheme) and the Festival d’Aix-en-Provence (Micaëla in Carmen). Her debut with the Berlin Philharmonic Orchestra under Sir Simon Rattle in Berlin, Salzburg, Lucerne and Paris (Haydn’s Die Schöpfung) was hailed a sensation.

Since 2017/18 she has been an ensemble member of the Berlin State Opera, taking on the roles of Gretchen (Schumann's Szenen aus Goethes Faust at the re-opening of the Staatsoper Unter den Linden), Gretel (Haensel and Gretel) and Violetta (La Traviata). In May 2018 she sings Lauretta (Gianni Schicchi), followed by Zerlina (Don Giovanni) in June 2019, both for the Opéra national de Paris, and next year takes the title role of Manon in a new production for Zürich Opera. Elsa Dreisig graduated from the Conservatoire National Supérieur de Musique et de Danse in Paris. 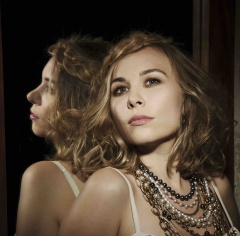