One of France’s foremost pianists, Bertrand Chamayou has garnered international recognition for his virtuoso technique, insightful musicianship and striking originality across a vast repertoire.

He has performed at the Théâtre des Champs Elysées and the Philharmonie de Paris, the Lincoln Center New York, London’s Wigmore Hall, the Berlin Philharmonie, the Concertgebouw in Amsterdam and the Suntory Hall in Tokyo, among other venues, and at major festivals including Lucerne, Mostly Mozart in New York, the Edinburgh International Arts Festival, the Beethovenfest in Bonn and La Roque d’Anthéron.

As soloist, Chamayou’s recital highlights include the Théâtre des Champs-Elysées, Wigmore Hall, the Elbphilharmonie Hamburg, as well as performing as part of the Great Performers concerts at the Lincoln Center New York, and opening the Southbank Centre’s International Piano series in London. He has undertaken several ‘marathon’ recitals of substantial bodies of work, most memorably the complete piano œuvre of Ravel, Liszt’s Etudes and Années de pèlerinage, and Messiaen’s Vingt regards sur l’enfant-Jésus.

Bertrand Chamayou was born in Toulouse, where his musical talent was quickly noticed by pianist Jean-François Heisser, who was to become his professor at the Paris Conservatoire. He continued his training with Maria Curcio in London. He has received France’s prestigious Victoires de la Musique Classique prize on four separate occasions. In 2015, he was named Chevalier of the Order of Arts and Letters. 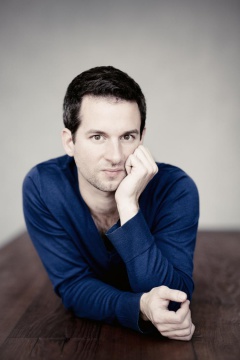