Just over 25 years ago, Britten Sinfonia was established as a bold reimagining of the conventional image of an orchestra. A flexible ensemble comprising the UK’s leading soloists and chamber musicians came together with a unique vision: to collapse the boundaries between old and new music, to collaborate with composers, conductors and guest artists across the arts, focussing on the musicians rather than following the vision of a principal conductor; and to create involving, intelligent music events that both audiences and performers experience with an unusual intensity.

The orchestra is named after Benjamin Britten, in part a homage to its chosen home of the East of England, where Britten’s roots were also strong. But Britten Sinfonia also embodies its namesake’s ethos. Its projects are illuminating and distinctive, characterised by their rich diversity of influences and artistic collaborators; and always underpinned by a commitment to uncompromising quality, whether the orchestra is performing in New York’s Lincoln Center or in Lincolnshire’s Crowland Abbey. Britten Sinfonia musicians are deeply rooted in the communities they work with, with an underlying philosophy of finding ways to reach even the most excluded individuals and groups.

Today Britten Sinfonia is heralded as one of the world’s leading ensembles and its philosophy of adventure and reinvention has inspired a new movement of emerging chamber groups. It is an Associate Ensemble at London’s Barbican, Resident Orchestra at Saffron Hall in Essex and has residencies in Norwich and Cambridge. It performs an annual chamber music series at London’s Wigmore Hall and appears regularly at major UK festivals including the Aldeburgh, Brighton, the Norfolk and Norwich Festivals and the BBC Proms. Over the last year the orchestra has performed a live broadcast to more than a million people worldwide from the Sistine Chapel, toured to Amsterdam, Paris and Bilbao and in the 2019-20 season will be touring to the US, Mexico, China and much of Europe. It is a BBC Radio 3 Broadcast Partner and has award-winning recordings on the Hyperion and Harmonia Mundi labels.

Recent and current collaborators include Keaton Henson, dancer/choreographer Pam Tanowitz and theatre director Ivo van Hove, with commissions from Thomas Adès, Gerald Barry, Shiva Freshareki, Emily Howard, Brad Mehldau and Mark-Anthony Turnage. The orchestra was recently announced as a commissioning partner in a ground-breaking partnership between minimalist composer Steve Reich and visual artist Gerhard Richter in a new work which will be premiered this Autumn. 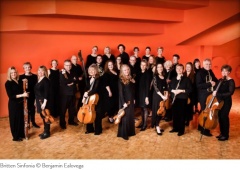