Ivor Bolton is Chief Conductor of the Basel Sinfonieorchester, Artistic Director of the Teatro Real in Madrid, Chief Conductor of the Dresden Festival Orchestra and Conductor Laureat of the Mozarteumorchester Salzburg, with whom he appears annually at the Salzburger Festspiele, and on tour (including the 2006 BBC Proms in London), and with whom he has already built up an extensive discography including a critically successful series of Bruckner Symphony recordings. In the UK he has been Music Director of English Touring Opera, Glyndebourne Touring Opera, and Chief Conductor of the Scottish Chamber Orchestra. He enjoys a close relationship with the Bayerische Staatsoper where, since 1994, he has conducted a wide range of new productions, most notably Monteverdi, Handel and Mozart. He has been awarded the prestigious Bayerische Theaterpreis for his outstanding work in Munich.

He has been a regular guest at the Maggio Musicale Fiorentino and the Opéra National de Paris and other operatic engagements have included Covent Garden, ENO, Bologna, Brussels, Amsterdam, Lisbon, Sydney, Berlin, Hamburg an Geneva. Orchestral engagements have included the Proms, Lincoln Center New York, Zürich Tonhalle-Orchester, Koninklijk Concertgebouworkest, Orchestre de Paris, Rotterdams Philharmonisch Orkest, Gürzenich Orchester Köln, Wiener Symphoniker and the Freiburger Barockorchester. His many recordings, apart from those with the Mozarteumorchester, include Monteverdi’s Poppea and Handel’s Xerces and Ariodante with the Bayerische Staatsoper.

Highlights of the 2017/18 season include new productions of Strawinsky’s The Rake’s Progree at the Netherlands Opera, Mozart’s Lucio Silla and Britten’s Gloriana at the Teatro Real in Madrid, a tour through the UK with the Symphony Orchestra Basel, as well as a return to Munich with Mozart’s Entführung aus dem Serail and Joseph Haydn’s Orlando Paladino. Moreover he will conduct subscription concerts with the Symphony Orchestra Basel, Mozarteumorchester Salzburg and the Dresden Festival Orchestra. 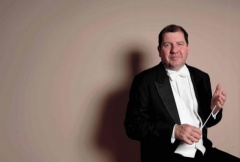