Daniele Boccaccio is an organist and harpsichordist born in 1967, in Pisa, Italy. Daniele began his musical studies at the age of five under his father’s direction. In 1985, he won the ninth edition of the Noale’s National Organ Competition, becoming the youngest winner of this event to date.
In 1989 Daniele obtained the Organ and Organ Composition Diploma at the “L.Cherubini” Conservatory in Florence.

Daniele Boccaccio, harpsichordist
He has participated in several master-classes on J S Bach given by Michael Radulescu and on Ancient Music given by H. Vogel, M. Torrent-Serra, LF. Tagliavini and S. Innocenti.

Meeting Radulescu in 1992 was an important turning point in Daniele’s life as he was invited to rejoin Radulescu’s organ class at the prestigious “Universitat fur Musik und Kunst darstellende” in Vienna, where Daniele lived until 1998.
In Vienna he also attended Gordon Murray’s Harpsichord class and Augusta Campagne’s Thorough Bass class, obtaining his Soloist Diploma in Organ and Harpsichord with first class honours under the title Magister Artium, one of the greatest Austrian cultural acknowledgements. To date, Daniele is the first and only Italian musician to have obtained both degrees.

Daniele later published his Magister Artium degree thesis: “Regole per accompagnar sopra la parte, eine italienische Generalbaßschule um 1700" (Florence 1999, The Courier), in German. The work includes the translation from old Italian into German of the anonymous treatise, an important essay on Italian Thorough-Bass from the early 18th century, integrating it and putting it in comparison with other treatises of the period.

In 1999 Daniele was founder and conductor of “Seicento Italiano”, a chamber music group whose members play on original instruments or copies. They made the first world CD-recording of Sonate di violino a voce sola by Giovanni Antonio Leoni (record company: “Tactus”), where he performed as Harpsichordist and Organist. This is the very first collection entirely dedicated to violin and Thorough Bass in the history of music.
In 2000 Daniele directed as well as performed as Harpsichordist in the first world CD-recording of Otto Cantate per Soprano, due Violini e Basso by Domenico Scarlatti (record company: “Tactus”) with “Seicento Italiano”. This recording was awarded at the “Recording International Prize Antonio Vivaldi for the Italian Ancient Music 2000” of Venezia as one of the best CD-recordings of the year.
He continued recording many CDs, including several world premieres, for Amadeus, Bongiovanni, Tactus, Dynamic, Symphonia, Hyperion.

Daniele Boccaccio has a very active national and international concert career both as a Soloist and Thorough-Bass Player.

In 1995 he had a teaching assignment as a Harpsichordist in the Ancient Music Department of Music Pedagogy at the “Universität für Musik und Kunst darstellende” in Vienna.
He then taught at the Conservatory of Music “L. Perosi“ in Campobasso, and from 2001 to 2009 he was Organ and Organ Composition Professor at the Musical Institute “V. Bellini” in Catania at the Conservatory “J. Tomadini“ in Udine, and then at the Conservatory “A. Buzzolla“ in Adria.
He now teaches Organ at the Conservatory “A. Vivaldi” in Alessandria, Italy, and he is artistic director of the classic music record company Euterpe Classic Music. 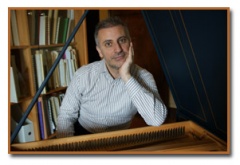