The Berlage Saxophone Quartet was founded in Amsterdam in 2008 by Lars Niederstraßer, Peter Vigh, Kirstin Niederstraßer and Eva van Grinsven. The four musicians studied at the Conservatory of the city with Arno Bornkamp. Further studies followed with Daniel Gauthier (Cologne), Jean-Denis Michat (Lyon) and Claude Delangle (Paris). Additionally, the quartet studied chamber music together with the Artemis Quartett in Berlin and also did master classes in ensemble playing with members of the Alban Berg Quartett and the Belcea Quartet.

The four young musicians quickly made a name for themselves as a quartet, winning numerous prizes in competitions. These included the 1st Prize at the Selmer Saxophonquartett Wettbewerb (2009), the 1st Prize at the Chamber Music Competition of the Storioni Festival (the Jury and the Audience Prize in 2011), the 1st Prize and the Audience Award at the international OnWings! Presentatieconcours (2011). The ensemble won over their listeners with their infectious enthusiasm, their natural charm and the intense musicality of their performance.

At the Deutsche Musikwettbewerb 2011 in Berlin the Berlage Saxophone Quartet won a stipend with their playing and were included in the 2012/2013 season in the 56th Germany-wide selection of “Concerts by Young Artists”.

The quality of the Berlage Saxophone Quartet is demonstrated in its creative concert programmes and arrangements penned by themselves, which open up again and again new worlds of sonority for their audiences. This has led to them being invited to make international concert apearances as well as to radio and television performances with channels including Deutschlandfunk, NDR and Radio 4 (NL). The ensemble’s debut CD “SaxoFOLK”, which came out in 2014 with MDG, was warmly acclaimed by the international music press. “The Berlage Saxophone Quartet impresses by its mellow, homogenous, shimmering sound and an infectiously sparkling spontaneity.” (Audio, May 2014) 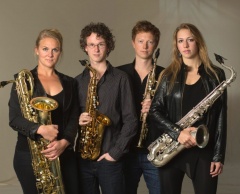