Nicola Benedetti is one of the most sought-after violinists of her generation. Her ability to captivate audiences with her innate musicianship and dynamic presence, coupled with her wide appeal as a high-profile advocate for classical music,has made her one of the most influential classical artists of today.

The Summer of 2018 saw Nicola make her debut at the Philharmonie de Paris with Karina Canellakis and the Orchestre de Paris. She returned to the BBC Proms with Andrew Gourlay and the BBC Concert Orchestra to celebrate the 40th Anniversary of the BBC Young Musician. In addition, Nicola returned to Edinburgh to perform at the Edinburgh International Festival twice: with Marin Alsop and the Baltimore Symphony Orchestra, and with Richard Egarr and the Academy of Ancient Music.

Over the last 12 months Nicola has also continued her role as a dedicated, passionate ambassador and leader in music education. She has reached over 1250 young people through workshops, masterclasses, partnership projects, and school visits, providing key moments of inspiration for young instrumentalists, as well as focused, high quality teaching and guidance. Nicola has also connected with over 100 teachers, aiming to support their practice, highlight their essential role in society – especially during a period when many jobs have been under threat – and encourage collaboration and mutual learning. This commitment to supporting the UK’s music practitioners was underlined in July, when Nicola took over as President of the European String Teachers Association.

Through all these events and partnerships, Nicola aims to tackle the paradox that faces all young players; how to balance the perseverance and discipline required to master technical challenges with the consistent passion, love, and freedom of expression that is the impetus of all the most powerful music-making. This is an idea that will also feature in a key 2018 project – Super Strings Sessions with Sistema Scotland – which will see Nicola work directly with 500 young people in events across four different cities.

Winner of Best Female Artist at both 2012 and 2013 Classical BRIT Awards, Nicola records exclusively for Decca (Universal Music). Her most recent recording of Shostakovich & Glazunov Violin Concertos has been met with critical acclaim. Richard Morrison of The Times maintains that “This riveting performance of Shostakovich’s First Violin Concerto is Nicola Benedetti’s best recording to date.” Her past seven recordings on Universal/Deutsche Grammophon include a varied catalogue of works from Szymanowski Concerto (London Symphony Orchestra/Daniel Harding) to Homecoming; A Scottish Fantasy, which made Nicola the first solo British violinist since the 1990s to enter the Top 20 of the Official U.K. Albums Chart.

Nicola attracts an enormous amount of worldwide media attention following the various facets of her extraordinary career and her international television appearances have been wide and varied including performing at the Opening Ceremony of the 2014 Commonwealth Games to a live audience of approximately 40,000 and TV viewing audience of 9.4 million people.

Nicola was awarded the Queen’s Medal for Music in 2017, the youngest ever recipient, and was appointed as a Member of the Most Excellent Order of the British Empire (MBE) in the 2013 New Year Honours, in recognition of her international music career and work with musical charities throughout the United Kingdom. In addition, Nicola has received eight honorary degrees to date.

Born in Scotland of Italian heritage, Nicola began violin lessons at the age of five with Brenda Smith. In 1997, she entered the Yehudi Menuhin School, where she studied with Natasha Boyarskaya. Upon leaving, she continued her studies with Maciej Rakowski and then Pavel Vernikov, and continues to work with multiple acclaimed teachers and performers. 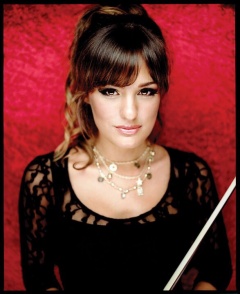