Thomas Beijer (1988) is a young pianist and composer praised for his excellent technique and artistic integrity. A clear and profound musical insight is evident in his performances and compositions.

Born and based in The Netherlands, Thomas Beijer enrolled at the Conservatory of Amsterdam, where he studied with Jan Wijn. He took masterclasses with Jorge Luis Prats, Emanuel Ax, Menahem Pressler, Murray Perahia, Pascal Devoyon, Jacques Rouvier and Elza Kolodin. Thomas Beijer concluded his Master's study in 2011 by graduating with the Highest Distinction.

By winning the prestigious Young Pianist Foundation National Piano Competition in 2007, Thomas Beijer positioned himself at the top of a new generation of pianists in The Netherlands. The international jury characterized Beijer as a ' very interesting musical personality, with distinctive ideas about music. A true artist '.
From the age of ten Thomas Beijer performed recitals in Europe and Asia. As a soloist he played piano concertos by among others Mozart, Beethoven, Grieg, Brahms, Franck, Ravel, Gershwin and Adams, with orchestras such as The Hague Philharmonic Orchestra, The Brabants Philharmonic, Amsterdam Sinfonietta and the Netherlands Student Orchestra. He worked with conductors like Neeme Järvi, Nicholas Milton, Ed Spanjaard and Bas Wiegers.

His repertoire ranges from seventeenth-century music to contemporary compositions. Thomas has a special affinity with Spanish music; works by Albéniz, Granados and De Falla are often part of his recital programmes.

Thomas Beijer is a multitalented musician. Besides his performances as a concert pianist he is also a composer and a passionate chamber musician.Thomas is a member of the Amsterdam Chamber Soloists and a regular guest of Camerata Royal Concertgebouw Orchestra.

Thomas Beijer's debut CD with compositions by Johannes Brahms was released in 2008. In 2012 he presented his second CD with works by Rachmaninoff. Thomas was signed by Lyrone Records in 2013 which resulted in the release of Canción y Danza and the preparations for his fourth CD. His recordings are available in over 40 countries worldwide. Thomas receives support from a trust provided by the Young Pianist Foundation. 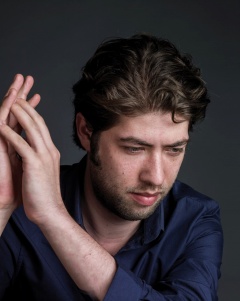