He has sang in prestigious festivals: Ambronay, Beaune, Utrecht, Innsbruck, la Chaise-Dieu, the Flanders festival, Vézelay... He founded his own group in 1999, l'ensemble Céladon, whom with he regularly sings in France and abroad.

He is also very keen on contemporary music and has performed works (including first performances) by Jacopo Baboni-Schilingi, Pierre-Adrien Charpy, Régis Campo, Pierre Bartholomée... He worked in close collaboration with the composer Jean-Philippe Goude and recorded the album Aux Solitudes with him. He also is the author of the album of electronic music Étrange Septembre, published in 2007.

The world famous composer Michael Nyman wrote for him and l'ensemble Céladon in 2016. 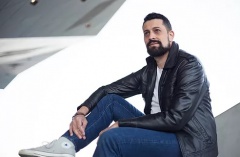