Hermann Bäumer has been Principal Conductor of the Philharmonisches Staatsorchester Mainz and Music Director of the city's Staatstheater since the 2011/2012 season. His thoughtful and imaginative programming, together with a willingness to confront lesser-known operatic repertoire have won him the plaudits of audience and press alike. As a former member of the Berlin Philharmonic he understands the subtleties of working successfully with an orchestra and is valued by orchestras the world over for his modest manner and commitment to the music.

Herman Bäumer has a talent for discovering and rediscovering seldom-heard repertoire. On the programme in Mainz for 15/16, for example, are Zemlinsky's Der Zwerg and Poulenc's Dialogues des Carmelites.
In the 05/06 season, as Music Director of the Theater Osnabrück, Hermann Bäumer gave the première of Alex Nowitz’s Bestmannoper to great public and critical acclaim. The programming of Gounod's La Nonne Sanglante was received with equal interest in the 07/08 season, and in 2013, Hans Werner Henze's Prinz von Homburg in Mainz met with universal approval. He directed Kurt Weill’s Aufstieg und Fall der Stadt Mahagonny at Berlin's Komische Oper and the première of Rotter by Torsten Rasch in a production by Katharina Thalbach at Cologne Opera.

Hermann Bäumer is also particularly respected for his work with numerous youth orchestras including the German National Youth Orchestra, the Young German Philharmonic and the Rhineland-Palatinate Youth Orchestra. 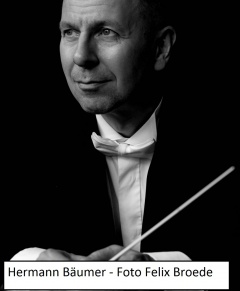