Since its creation in 2005, Aurora Orchestra has rapidly established itself as the most significant new British chamber orchestra in a generation. Under the artistic direction of Principal Conductor Nicholas Collon, Aurora has developed flourishing London series at LSO St Luke’s and Kings Place, and also enjoys an increasingly busy touring calendar both in the UK and internationally. It has worked with a roster of world-class artists including Ian Bostridge, Gerald Finley, Rosemary Joshua, Angelika Kirchschlager, Anthony Marwood, Kate Royal, Maxim Rysanov and Robin Ticciati.

Based at Kings Place since 2009, Aurora has played a central role in the venue’s year-long ‘Unwrapped’ series devoted to Mozart (2011), Brahms (2012) and Bach (2013), and was formally installed as the Kings Place Resident Orchestra in 2013. Aurora has also developed a particular reputation for collaboration across art forms, focused around its New Moves series at LSO St Luke’s. Since its launch in 2010, New Moves has pioneered a new kind of orchestral theatre, infused with eclectic programming, innovative presentation, and inspiring artistic partnerships ranging across dance, film, visual arts and theatre. Recent highlights include pairing Brazilian capoeira with French baroque music, tango with Bernstein, klezmer with Mahler, and breakdance with Shostakovich. The success of the series was recognised by the Royal Philharmonic Society, which made Aurora the youngest-ever recipient of its Ensemble Award – the UK’s most prestigious accolade for live classical music.

Guided by the conviction that orchestral music should be accessible, alive and relevant to the broadest possible audience, Aurora’s activities extend to myriad settings beyond the concert hall, with a varied programme of work in schools, hospitals and other community settings. Recent highlights of its programming for family audiences have included major televised family performances for the BBC Proms in collaboration with Aardman Animation (creators of Wallace and Gromit), and CBBC’s award-winning Horrible Histories series. 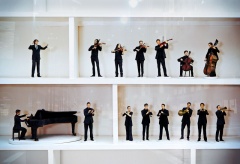